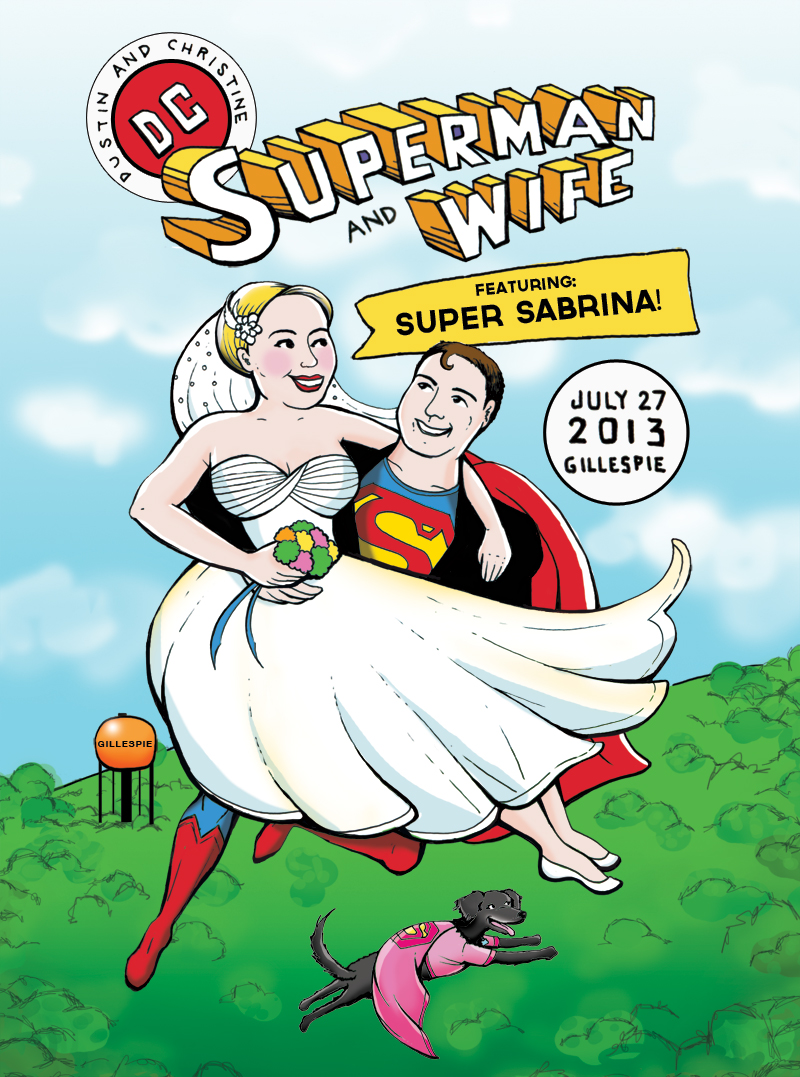 Earlier this spring, I was asked to draw a Superman-style program cover for my cousin Christine’s wedding. I had a lot of fun looking up comic styles and trying to get back into figure drawing with this project.

In order to get into the ‘superhero’ mood, I also watched the Stan Lee documentary, which gave a pretty interesting account of how he got started building up the Marvel and DC universe. Here is a pre-wedding photo of Dustin and Christine. Although Christine requested the drawing, it was originally intended as a surprise for Dustin, who is a huge Superman nerd.

Sketching out the title font for the program.  A total “Eureka!” moment occurred when I realized that ‘Dustin’ and ‘Christine’ fit perfectly to coincide with the ‘DC’ acronym. Dustin and Christine: from sketch to ink. Next, I placed the figure drawing and the text drawing into Photoshop. After tweaking the layout and color, I then presented this version to Christine. Christine dug the layout, but requested that I add in their furry little friend, Sabrina.

Some more sketches were made, and furry friend Sabrina was transformed into ‘Super Sabrina’ ! Before adding ‘Super Sabrina’ into the final drawing, I mapped out her placement within the layout. At one point, the dog appeared to be humping the bride. Hmmm….I thought…this is probably not appropriate..

Ultimately, I tried shrinking ‘Super Sabrina’ down and placing her as though she were below the flying bride and groom to add a bit of depth. The drawing is still pretty flat overall, so for next time I would like to have a more striking sense of depth. But it was a good practice of figure drawing and how not to draw a dog humping your cousin on her wedding day.