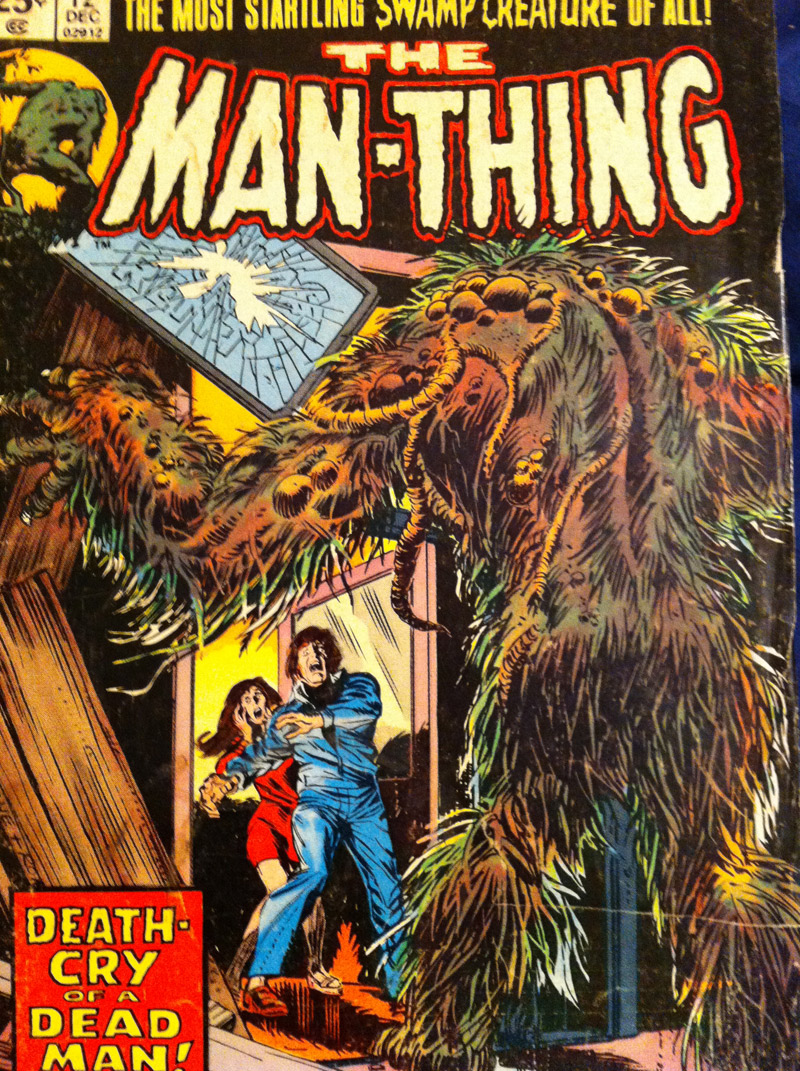 It was the last week of September, it bright and sunny in Sacramento, and it was comic con….

My newfound friends from the internet, Cindy and Kelly, joined me early on a Saturday morning to wander amidst the strange and amusing stalls of nerd nostalgia, current comic trends, and quirky, talented artist peoples. Possibly one of the most enjoyable moments of Sac Con was discovering “The Man Thing” comic and flipping through the pages and busting our guts as we giggled obnoxiously at all of the cheesy ’70s ads which proclaimed to save the lives of poor, wimpy 70’s nerd-boys by giving them ‘He-Man‘ bodies and ‘impressive mail-order sideburns.’ This ‘Science of the Seventies’ ad also made us chuckle. Our present world is so overwhelmed by electronics, this ad made me laugh. But it also made me think about how all those now-famous computer guys got started on their electronic genius businesses. Maybe they all saw this ad, and BOOM! personal computers! Duct-tape Alien, Predator(s), and girl with a light saber. Those alien-folk don’t stand a chance. Her hat is just too powerful. This fellar, Age Scott, was the only comic artist at this comic con who represented hip hop comics. He was super excited to be at the comic con. I suggested he talk with my former college professor, John Jennings, who is also a huge comic and hip hop aficionado. This artist, Georges Jenty, has an amazingly striking artistic style. He did work for the Buffy the Vampire Slayer and Serenity comics. I was soooo happy to learn from him that there exist Firefly and Serenity comics that answer many of the unanswered questions from the series, such as the back story of Shephard Book. Woo hoo! Can’t wait to read those! The colorful and whimsical drawings of Melissa Pagluica really stood out from the rest of the typical super-hero style artwork that permeated the con. Her drawings are light, beautifully colored, and almost have a bit of art-nouveau feel to them. She was selling a comic called ‘Above the Clouds.‘ Check out her stuff on Etsy! Unfortunately, I took a really crappy photo of this artist, Tomas Overbai, but his artwork was also rather unique and eye-catching. He is currently working on a story called Ichido, and Cindy and I were enthralled by the story behind the story. Check it out at his website, Fallen Sun Asylum.

After the comic con, Cindy, Kelly, and I required much nourishment, specifically in the form of authentic French cafe food, as suggested by Cindy. The restaurant was called Cafe Rolle, in West Sacramento, and I felt as though I were in a small, sunny cafe in France. I ordered a Brie (cheese) and walnut sandwich. After ordering, the ladies and I chatted, chatted, and chatted. Upon placement of food in front of face, immediate silence ensued. My sandwich was so delicious I wanted to reenact the famous diner scene from ‘When Harry Met Sally.‘ Maybe next time..

I saved a couple bites for David. Just looking at this sandwich makes me salivate. Bon Jour For Sure!!!!!