#11 Why I love playing jazz 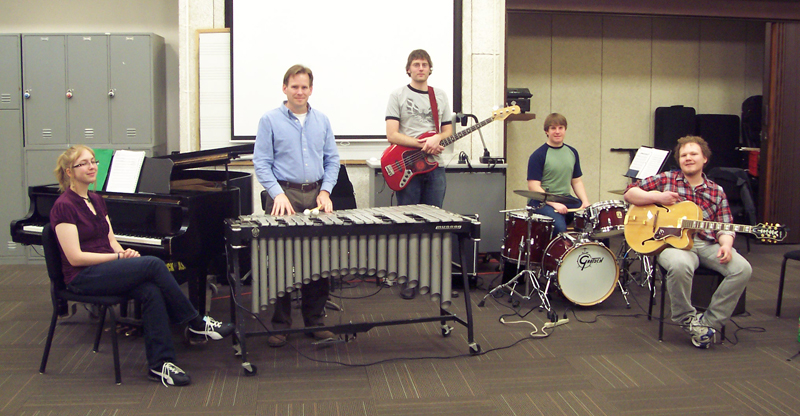 Back in 2012, I had the privilege of playing piano with the Parkland Community College jazz band. The band consisted of bass, vibraphones, drums, guitar, and piano. I had been playing piano solo for a long time prior to joining the band, and it was an exhilarating feeling to be able to have those spontaneous musical conversations with a group of pretty cool people.

One of the main reasons that I absolutely loved playing jazz piano with a band was the strange sort of hyper zen meticulous state that seemed to be required in order to play as a part of a band. A meticulous, obsessive compulsive state of mind was required to keep rhythm with the other band mates, while constantly changing notes and making up chords on the fly. At the same time while you were in this state of obsessive control of your fingers and timing, you also had to absolutely let go of yourself, all of your worries and cares in the world and pour your entire soul into the performance and just let it flow freely from your entire being. If you didn’t completely let go of yourself and all of your inhibitions, it just didn’t work. Without soul, there was no music, just noise.

You especially had to enter into this free flowing zen state while performing solos, because this was your time to shine. But then when you were comping (or playing backup chords) while your band mates soloed, you had to still continue this drunken spontaneous state while holding back your own voice (of the piano) so that you could let the voice of your band mates shine through.

I love jazz because it is the perfect outlet for any individual with a slightly anxious, obsessive temperament. Jazz takes those usually negative qualities and transforms them and frees them into a beautiful, colorful, and liberating art form.

Anyhow, as part of the process of embracing this art form, our professor, Mr. Kevin Hart introduced us to a variety of jazz artists including Michel Camilo, who is a phenomenally expressive and dexterous pianist. Check out the Michel’s performance of “From Within” The constant flow of dynamics, mood, and rhythm is just hoppin’!

Other artists that we learned about in the class include Pat Metheney, who seems to be a little bit more progressive and “out there” as an artist.

Here is the Parkland band performing ‘Trippin’ at the Iron Post in Urbana, Illinois in 2012. It may not be the best recording in the world, but still it’s fun to look back upon those days performing with those fellars.

Unfortunately, I sold my digital piano before moving out to California (it was simply too big to haul across the country in a little Ford Focus). I’m really feeling the pang of not having that outlet right now. Hopefully once we move, that gap can be filled and I can stop pestering my boyfriend with my lack of emotional outlets! Though I recently bought a mandolin (which is growing on me), it is still not the same as pouring your soul into the ivories.