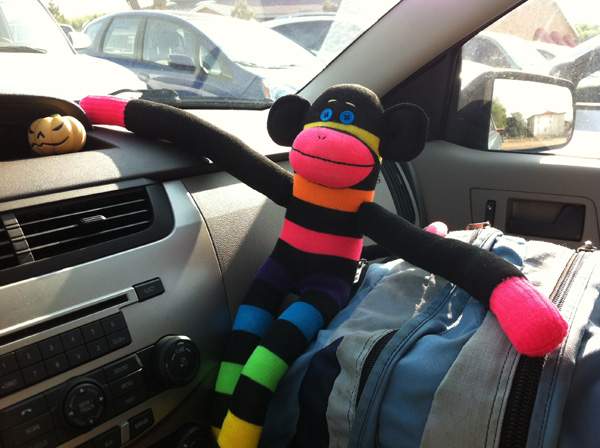 After spending the night at the RV Park outside of Santa Fe, New Mexico, I ventured off to Albuquerque where I continued to live the spontaneous life until the crappy hotel room beckoned to my tired soul.

Upon entering the city of Albuquerque, I had no idea where the hell I was going or what the hell I would be doing that day. I followed the big brown signs as those usually lead to nature-type stuff and my poor neglected legs were aching to feel their knee-joints bend and blossom again after the many hours and hours of stationary position.

I parked, pulled up my socks, and ventured off to meet the people of Albuquerque.

On the way to Albuquerque, the hills were rolling, the sun was shining, and Weird Al was wailing.

After exiting Route 40 toward the path of the big brown road signs, I drove and drove through a plethora of businesses until I came across a more residential, earthy, greeny looking area. Off in the distance there appeared to be…wait…was it??…..YES! A FARMER’S MARKET!! FOOD!! PEOPLE!!! Immediately upon entering the Farmer’s Market, I came across a tent full of sock monkeys.  I was desperately seeking simple human communication after those long lonely desert roads, and the sock monkey couple seemed friendly enough, so I started chatting with them. They suggested checking out the zoo, botanical gardens, and historic Old Town for things to do in town. And that’s pretty much what I did after the Farmers’ Market! They were such sweet people, I even bought a sock monkey from them, a real cool black and neon-colored jewel of a sock monkey. A couple tents down from the sock monkeys, was a plump lil lady named Beth. She was sweet and kind too. Her table was full of groovy painted gourds, and she told me all about Albuquerque. According to her, there is a lot of Native American culture in Albuquerque, and because there are people from all walks of life, there is little prejudice in New Mexico. I’m not sure how true this is, but many of the locals did seem really friendly. Beth also mentioned that a lot of old hippies live in the mountains, growin’ their veggies. Speaking of old farmer hippies, another tent in the farmers’ market featured “Green Growler Smoothies.” I bought one and chugged it for two reasons. One: I could drink a day’s worth of vegetables and nutrients in one o’ those things. Two: I could just imagine my sister squirming her face at the thought of chugging one of these disgustingly beautiful creations.

After filling up with nutritious green sludge, I drove over to the Albuquerque Zoo to say hello to the rest of the animal kingdom. For a short period of time I was petrified of flamingos, thanks to Neil Gaiman’s ‘Anansi Boys’… The omnipresent peacock…no zoo is complete without the strutting, uppity peacock. “A frog does not drink upon the pond in which he lives.”–Native American proverb I don’t remember what kind of toads these were, but they were certainly big and lumpy. My sister adores elephants. Today I vicariously adored them for her. My inner feminist really perked up upon reading the ‘Family Ties’ section. The temperature was unbelievably stifling at the Albuquerque Zoo. This polar bear was not diggin’ the heat.