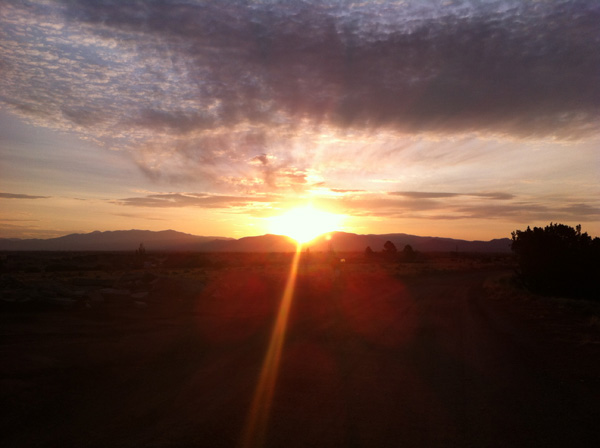 On Friday (June 28), I drove from Amarillo, TX to various places in New Mexico! On this particular day, I let Lady Spontaneity reign queen, and this is how the day went.

After leaving Amarillo, I stopped at a town called Tucumcari, New Mexico, which brought relief from the desert heat in the form of dino-edumacation at the Mesalands Dinosaur Musuem. These are some fluorescent minerals. Fluorescence is the emission of light by a substance that has absorbed light or other electromagnetic radiation. The museum featured many colorful and imaginative artwork. This painting depicts a hungry Phytosaur and some freaked out Coelophysis! This is a resin cast of Hadrosaur skin. Because of the weathering of the dinosaur skin artifacts, no one really knows for sure what color the dinosaurs’ skin may have been. The dino’s birthday suit could have been very bright and wild or rather dull and brown. The exhibit implied that there were probably a variety of colors, just like the birds of today. This is a bronze cast of a Camarasaurus skull. The Camarasaurus is the most common of the giant sauropods to be found in North America. I don’t remember what this guy’s name is, but he instantly reminded me of some Star Wars creature, and I could totally see him hanging out here.

On the way out of the dinosaur museum, I spoke with a friendly volunteer there who suggested checking out Las Vegas, New Mexico (trust me, it’s not the Vegas you’re thinkin’) and then Santa Fe for some artsy things to see. The museum volunteer said there hadn’t been a rain in a long time, and the whole state was under severe drought, so I wouldn’t be able to do much hiking near Santa Fe due to wild fires. But he said there were a lot of cool art galleries to check out.

He also suggested I take Route 104 for a more scenic view. All I can say is, I’m glad the gas tank was full before leaving dinoland, because Route 104 was a beautiful, winding country road with nothin’ for  miles and miles! I wandered around Las Vegas for a bit, then headed off to Santa Fe. I stopped at a gas station in Las Vegas, and saw a couple of young fellars with a broken down short bus. I had been carrying around my little Otto Mann action figure, and just knew that Otto was destined to live on the bus. It was a little something to cheer these guys up on their shitty stop at Las Vegas. As it turns out, the short bus guys were actually a travelling band called, Still the Sky’s Limit, from Orange County, California. They gave me their CD in exchange for Otto Mann. While driving around Las Vegas, I discovered ‘Henry’s Shoe Service.’  I just got a ‘kick’ out of this because my runner friend Henry has gone through Lord knows how many shoes.. I took Route 25 on the way to Santa Fe. The starkness of the countryside was fascinating and boring at the same time. And I was intrigued to see big rain clouds after all the locals’ talk of the drought.

When I got to Santa Fe, they actually did have some storms (and rain!). A lot of the traffic signals were out of power, and traffic was a mess, so I decided to leave and wander back towards Albuquerque. On my way down Route 25 towards Albuquerque I became increasingly fatigued and didn’t feel comfortable driving anymore. But I didn’t want to spend another night in a corporate box of a hotel room, so instead I spent the night in the corporate box of a Ford Focus in a very non-corporate countryside RV park just off the interstate.

That’s right Mom, I did not stay in a Motel 6. But dearest Mother, I knew that you would worry yourself sick if I told you otherwise. Sleeping in the car was not the grandest of times, but I was so happy to breathe in the fresh country air in the cool early morning. Look, Ma! I survived a night out in the wild, wild west! Yeeeeehawww! I sat atop the back of this old truck to watch the sunrise. This sure has gotta be the most sanitary seat in da house! The sun arose right between the butt crack in the mountains. It was stunning.