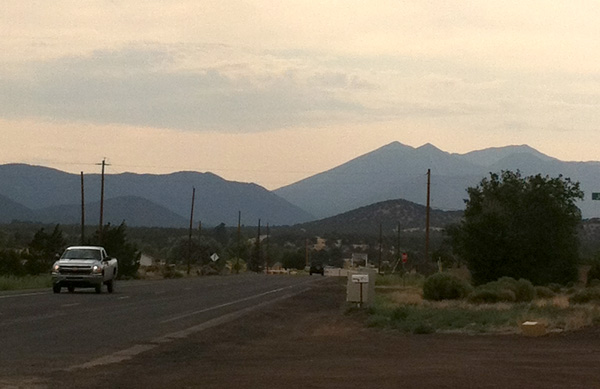 After leaving the very hot and dry desert climate of Albuquerque, New Mexico, I set sail for Flagstaff, Arizona. I knew absolutely NOTHING about Flagstaff before arriving in town. It was just a dot on the map and a good resting point along my way out to California. From what little I saw of Flagstaff looked like a picturesque town full of trees and a beautiful relief from all of the starkness and treelessness of the desert land prior to this green, hilly place. It looked like it belonged more in Colorado or somewhere in the North.

Unfortunately, I did not get to see much of the town as this was the last leg of my trip, and I needed a day to rest, but I wouldn’t mind going back to explore this town some more!

These impressive red rock formations stood grandly on the eastern side of Arizona, I was able to capture a bit of them on video before they disappeared into the abyss!

While the old iPod was a’charging, the song “Build Me Up, Buttercup” (performed by The Foundations), came on the radio. I started singing along to lyrics I knew not, simply because a good hometown buddy, Kendal, would always spontaneously sing this song. This is for you, Kendal!

While driving to Flagstaff, I exited off of I-40 to drive through a little town just to get a view of the landscape. The audio is from one of my favorite books, “Neverwhere” by Neil Gaiman. There were many happy clouds floating above this small Arizona town. Upon arriving at Flagstaff, I stayed at a Howard Johnson. It was by far, the nicest hotel I stayed at on the trip. All of the other hotels were honestly a bit shady. I picked up this sock monkey from some nice folks at the Farmers and Artists market in Albuquerque. This is the happiest neon sock monkey you ever did see! I was craving nachos for dinner, but the  diner nearest to the hotel had cheese fries, which did the job. I regret not tipping the guy who took my order, as he was pretty friendly and made sure I had ketchup! Instead I gave two bucks to the homeless guy outside.